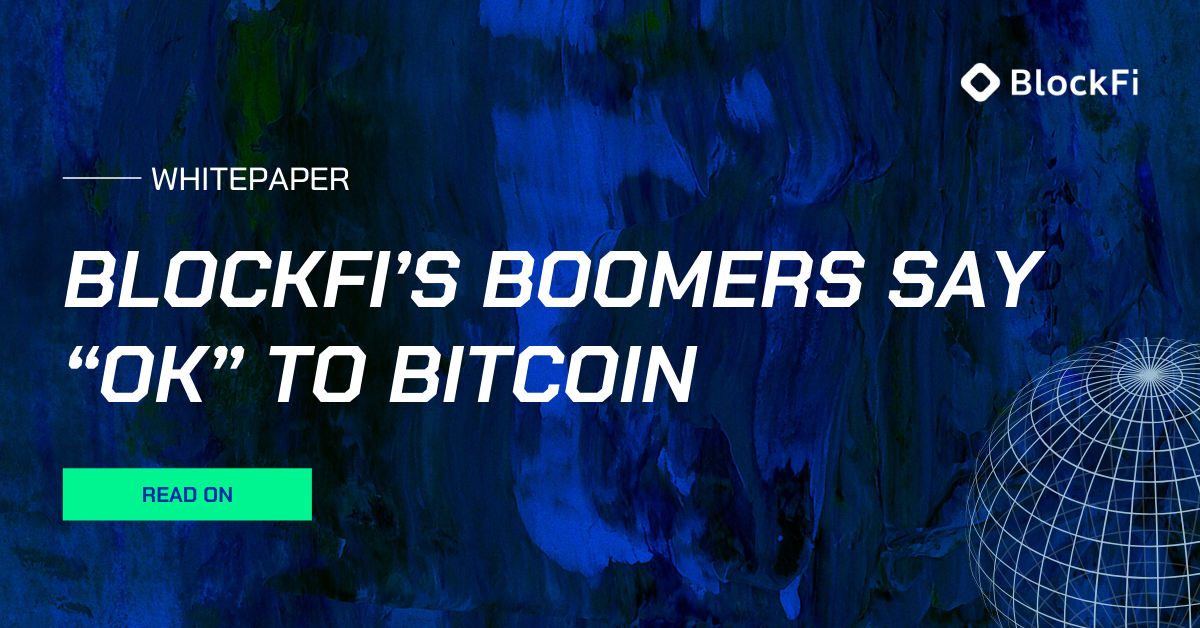 The Future of Crypto

Charles Schwab’s Q4 2019 data revealed that $GBTC, the publicly listed Grayscale Bitcoin Investment Trust, is the fifth largest stock holding for Millennials, just behind $TSLA and ahead of $NFLX. Millennials clearly can’t resist buying and selling bitcoin in their brokerage accounts and IRAs through $GBTC. This shouldn’t come as a surprise, given that $GBTC trades 20 – 50% of Coinbase’s physically settled volume on any given day.
And the only thing easier than using BlockFi to own crypto is calling your financial advisor and instructing her to buy $GBTC for your account.
Charles Schwab Stock Ownership By Generation 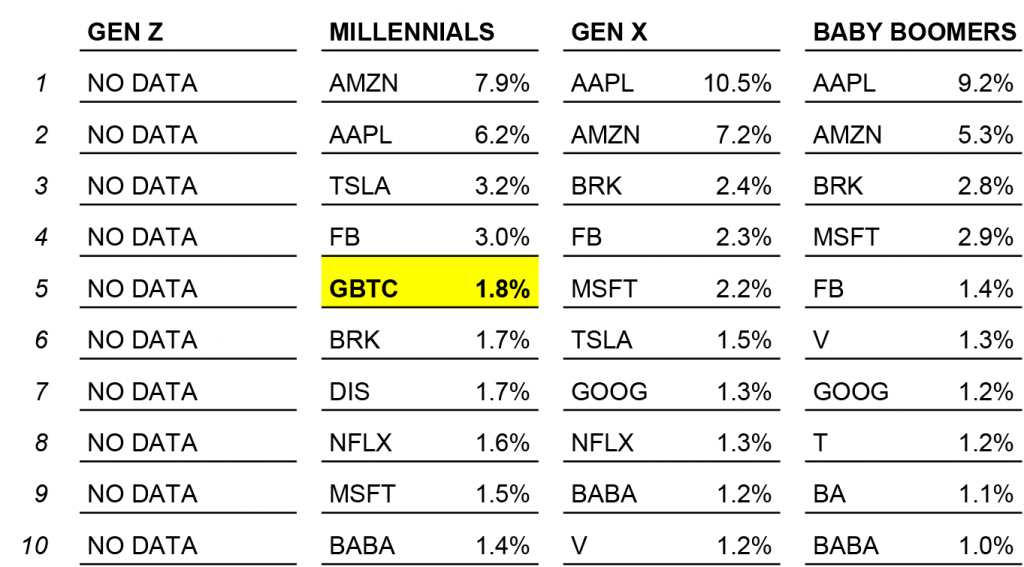 What is surprising for us is that no generation other than Millennials held enough $GBTC to register on the report. We find this surprising because BlockFi’s value and offerings cut across all ages, providing every generation the opportunity to own and get paid to own crypto equally.
Schwab’s quarterly data was collected from 142,000 users with balances between $5,000 and $10 million in their Schwab accounts. Zoomers (Gen Z) were not included as a category. To replicate these results, we collected data from BlockFi users with balances between $5,000 and $10 million in their BlockFi Interest Accounts.
BlockFi Crypto Ownership by Generation

The data revealed that across all generations of BlockFi users—Millennials, Gen X, Baby Boomers, and even Gen Z—the most owned asset is crypto, far ahead of Stablecoin. As a refresher, Stablecoins are digital tokens that move on blockchain rails while having value backed by $1.00. BlockFi currently supports USDC and GUSD; for GUSD, Gemini holds every dollar that comes into the Stablecoin in reserve with State Street Bank.
So, have we all melted into the “internet generation,” as Jack Ma calls it? Has bitcoin conquered Millennials’ wealth allocation strategy in a way that $NFLX couldn’t? And has BlockFi figured out a way to finally bring the Millennial currency of bitcoin to the valued demographic of Baby Boomers in a way that Charles Schwab would envy? Is it really impossible to tell apart crypto-owning Millennials from crypto-owning Boomers? Not so fast.
BlockFi Coin Ownership by Generation

Bitcoin is, of course, the most widely owned crypto-asset across generations. ETH is the second most owned currency after BTC for all generations except Boomers. So, at first glance, the only difference in generational preferences is that Boomers like to own Stablecoins more than Ether. But surely this is just an incidental statistical discrepancy given the general dominance of bitcoin relative to all other assets?
Taking a closer look at the numbers, it does appear that Boomers have figured out a way to carry their risk-averse, fiat-loving tendencies into the crypto sphere. According to the BlockFi proprietary Fiat-Preference Index, which benchmarks the portion of Stablecoin ownership relative to crypto, Boomers have a 46.8% higher preference for Stablecoins than Gen Z. Furthermore, there is a distinct generational trendline of Stablecoin preference from Gen Z to Boomers. In other words, as a portion of their portfolio Boomers have a 46.8% higher affinity for holding USDC and GUSD rather than BTC/ETH/LTC.
BlockFi Generational Fiat-Preference Index

This trend has actually played out before. In the late 1970s and early 1980s, U.S. Treasury yields went as high as 15% before starting a 40-year grind down to less than 1%. During this period, anyone who woke up with the belief that the U.S. would continue to exist by the end of that day could choose to get paid 15% just for having such a belief. The asset management industry productized the “60-40” portfolio, meaning a portfolio allocation of 60% stocks and 40% bonds, on the back of these high rates. Baby Boomers bought into this portfolio and profited en masse. The allocation to U.S. Treasuries simultaneously lowered overall volatility on these portfolios while giving them mark-ups as interest rates grinded down, with global money adding to U.S. Treasury allocations over the coming decades.What makes this divergence even more interesting is that BlockFi uses Stablecoins to fund bitcoin-collateralized loans. In other words, BlockFi’s Boomers are putting Stablecoins on the BlockFi platform to help fund loans for Gen Xers, Millennials, and Zoomers who want to borrow Stablecoin for productive economic purposes, including starting businesses, purchasing real estate, and buying more bitcoin. It’s the generational wealth transfer in action.
Analogously, anyone who wakes up today with the belief that bitcoin will continue to exist by the end of the day unlocks powerful financial options similar to those enjoyed by Boomers in the 1980s. These people may find that, of their total crypto exposure, it might be appropriate to allocate some amount of USD/Stablecoin to lend against crypto rather than just owning crypto. Since 2017, BlockFi has made such allocations possible for tens of thousands of users. Stablecoins posted to BlockFi’s platform are primarily used by BlockFi to fund bitcoin-collateralized lending, letting users fund the bitcoin ecosystem while limiting day-to-day volatility and earning an 8.6% APY.
Just like Treasuries in the 1980s, we believe that bitcoin-collateralized loans, with credit risk tied to selling highly liquid bitcoin collateral, will become a major staple of portfolios for high-net-worth individuals (i.e., Baby Boomers), family offices, and, eventually, investment funds. We expect the continued allocation of liquidity into the crypto space enabled by lending will push the bitcoin price beyond its 2017 all-time high in the near future.
And regardless of what cryptocurrency you post with BlockFi, our Interest Payment Flex feature lets you receive interest denominated in bitcoin, Ether, Litecoin, or Stablecoin. Gen Zers and Millennials can use this feature to receive monthly interest on their posted BTC in Stablecoin instead of bitcoin. This feature will allow future generations to roleplay what it was like to get interest payments in inflationary, non-appreciating Stablecoin rather than deflationary, moon-bound crypto.
We’re confident that outsized Millennial and Gen Z ownership of crypto will create generational wealth for Millennial and Gen Z families through the first global, intergenerational currency: bitcoin. But, for the time being, BlockFi’s Baby Boomers are happy to lend them Stablecoins for productive economic use and to lower the volatility of their own portfolios while increasing crypto exposure.
Whether you’re a Zoomer, a Millennial, or a Boomer, lending USD/Stablecoin against bitcoin at rates equivalent to LIBOR + 6% may be one of the world’s best risk-adjusted returns. BlockFi is here to help you allocate accordingly—all you have to do is believe that magic internet money won’t magically disappear anytime soon.

As of February 14, 2022, the BlockFi Interest Account (BIA) is no longer available to new clients who are US persons or persons located in the US and existing US clients with BIA accounts are unable to transfer new assets to their BIAs. Learn More.
Products
Institutions
Services
Resources
Company
Follow Us

Everything you need on-the go
Download the BlockFi app